Posted on March 11, 2014 by amandafullwoodma

The second phase was where we worked on the practicalities of the build. Firstly we borrowed one of the heads for a paint test so the hairdressers could work with waterproof paints for decorating the heads, then we devised some visuals to give us something to work from and to show the hairdressers what could be done. We found acrylic paints to be sufficient for brightness of colour and to be hard wearing with a PVA coating.

Below are some of the concepts and visual research that we undertook. 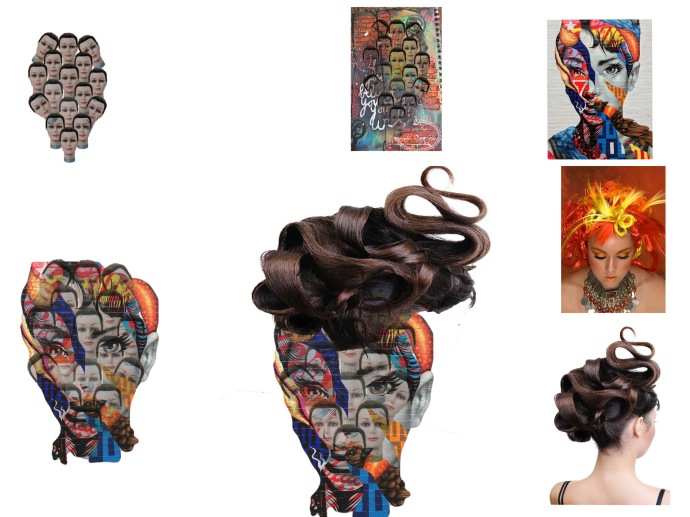 We spoke to the workshop and model making department to get an idea of the process and the cost of doing such a design. The hairdressers wanted the head to be completely transparent and head shaped which meant making some kind of curved front. We found out early on that this was not possible for a number of reasons, firstly because it was a lengthy process and we would have to vacuum form a plastic front, which would take weeks. Secondly it would cost us near £1000, which given the budget was impossible.

So Emma and I set about reworking the design so to create a shape that was still head shaped and still allow all the heads inside to be seen. We had to inform the hairdressers of an altered design that was more angular and allowed the face to be covered with straight flat pieces of acrylic sheeting which would make the build quicker and cheaper.

The model above provided a visual for working out how many heads needed painting, the dimensions and as a guide for the workshop and hairdressers.

When we finally spoke to Mick at the workshop we were told that there was very little time that the workshop was free.  He gave us a couple of slots in which it would be possible, amounting to 2-3 days at the most, one day being too close to the deadline. He also looked at the model and said that it would take some skill to angle the wood and joints and that he would have to do that, time permitting.

He suggested a bit of a “find object and alter scenario” due to the time constraints and later that day we had a search for furniture that would be suitable. We found a TV unit that could be altered and an old plinth from Nottingham Trent that was going to be scrapped. In doing so, we were keeping to our original plan of using recycled items as well as saving money and time. We took the TV unit and plinth to Mick and worked out a day for construction.

Later that week, Emma and Mick worked on the structure, altering the shape a little so the back of the unit had a curve. The shelves were removed to create a space inside for the heads to fit. Then they fixed the head unit to the plinth neck. 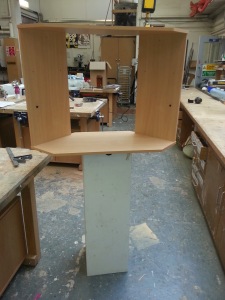 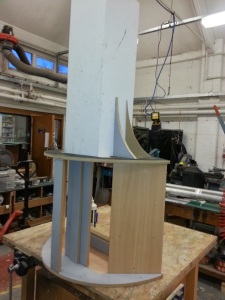 We also had to provide the hairdressers with a wire structure for their hair design that would sit on top of the head. They had decided to go for a hair style in the shape of Robin hood’s hat. So we built a wire shape and covered it with chicken wire to provide a framework and holes to which they could sew or fix hair. They told us that the hair was going to be costly so opted for a combination of wool with hair for the edging. We took the wire hat to them for decoration. At this point we had about 2 weeks left until the deadline. Next phase was decoration. 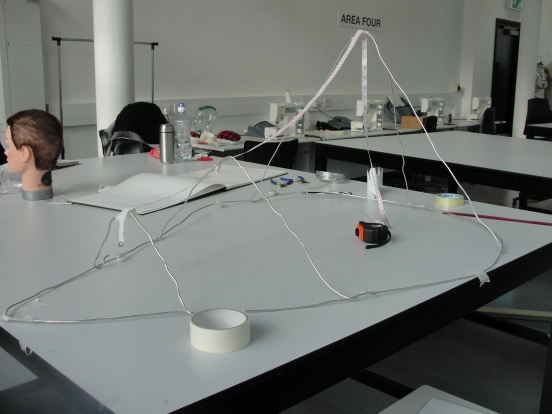 Above image shows the full hat structure with wood supports for stability.