Posted on April 18, 2014 by amandafullwoodma

To answer my MA project question I have organised a more hands-on approach to research as I feel it is one of the best ways to really understand the role of the production designer and get some first-hand experience in real-time. A large part of my project focuses on the pre-production stage of design and will go on to compare the processes within the art department and relationship with post-production. The work is split between asking questions about the role in general, questions that are more off the cuff in response to my experiences and own work, and observations over the two-day work shadowing period.

As the case study focuses on a designer rather than a particular film or programme I am looking at the role in both film and TV. The 2 day work shadowing focuses on a T.V. drama so will show the contrasts between T.V. and film as well as budget and variety of jobs that the production designer takes on. My questions will incorporate both T.V. and film and will attempt to bridge the gaps in design processes. They will also be about the production design role as a whole and how it is evolving in light of technological advancements.

My aim is to answer the following question and to inform my own project and personal development.

Given the post production techniques available today, what is required from the Production Designer at the pre-production stage in terms of scenic design?

An overview of Matthew Gant’s work

Q+A session prior to meeting

My work shadowing and observation of his role (2 days)

I will start my study by a brief overview of Matthew Gant’s work to date.

Matthew Gant currently works as a production designer. After working his way through the art department from graphics  to art director for the first series of Life On Mars he got his big break into production design when he was employed to design the second series. The show was nominated for a BAFTA for best production design. Since then he has worked on a variety of T.V. shows and features, most recently Endeavour and Chasing Shadows, both of which are crime dramas. The features he has designed includes Hush, The Liability and the recent top 10 entry The Quiet Ones with the Hammer Horror production company.

I have complied a series of images to show the variety of productions he has designed including some concept art below. 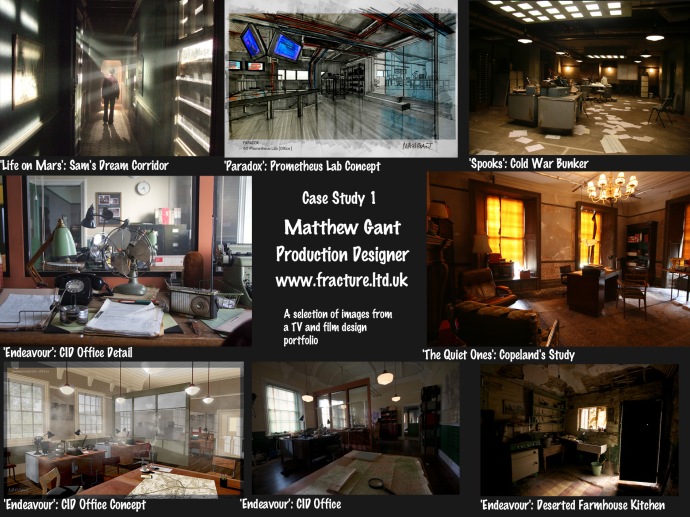 Before organising a meeting I sent Matt a selection of questions so he could see what elements of his work would be the most beneficial to observe. Below are some of the answers he gave:-

• How long is the pre-production stage and what does it usually involve?

The designer’s pre-production stage for a television series can be anything from 4 to 16 weeks, depending on the complexity of the project and the budget. A low budget film could be similar and the more money there is on a film, the longer the prep period normally.

Prep consists of research and concepting after liaising with director, Dop, producer and other HODs.
We will then go on to choose locations and design and build sets with art directors, at the same time working with set decorator/production buyer to begins choosing dressing props and finishes for sets. Simultaneously there will also be graphic designers, props makers, vehicle coordinators, SFX and VFX technicians and many other contributors to liaise with and brief.
At some point during the the prep period we will have a schedule drawn up by the 1st AD which will then allow us to prioritise the sets and locations in the order in which they will be shot.

• Does design for T.V. differ from film in any way?

One-off TV drama is similar to film, serial drama is different in that you will often have more than one director shooting different episodes, and the prep continues for the next director whilst the previous director is filming, so it’s a bit like spinning plates sometimes.
• Are you involved in the production/post production stages of design? If so how?

Sometimes we will have an input with VFX where there are set extensions and CGI work to complete the picture. But often on smaller budgets, we will finish in the final day of principal photography.
• How much are you involved in the decisions about location or budget?

The rate department budget is my responsibility and takes up probably about a third of my time, unfortunately all design decisions are made in the context of how much they will cost. Location choice is a big part of design and so it is one of my responsibilities.
• Would you say that the role of the production designer is changing in regards to todays technology such as CGI?

Yes. Will explain more when we speak.
• In regards to genres such as historical, thrillers etc are there different challenges in terms of design?

Yes. Again – we should discuss this in person.

• How did you get into production design?

Started as a graphic designer on work experience then worked my way up through the art department. My first design credit was Life on Mars 2 (after having been the art director on the first series).
• Do you use any particular software packages for design or more traditional skills such as drawing?

Still draw by hand but use Sketch Up a lot for 3D concepting and photoshop for image manipulation and rendering.

It made a lot more sense to discuss some of the questions in more detail on location. Also some of the observations will allow me to flesh out some of the information.