The Role of The Production Designer: Case Study 1- part 3

Posted on April 26, 2014 by amandafullwoodma

The second day took on a different pace compared with day one. Instead of being at one place and filming we were to visit a couple of locations that were being dressed for filming the following day.

The day started at 8am and we all met at the front entrance of Tower Hamlets College which was closed for Easter. Along with Matt and I there was a small team of construction men/fitters, the set dresser and Art Director. The school had been chosen because it fitted well with the architectural features of the hospital location and was being dressed to be used as a continuation of that location. The writer and Director were both keen on the idea of the secure hospital taking on a more school like appearance rather than a prison. The Tower Hamlets location also had some features that would provide visual interest on camera such as the main atrium area in which the character uses the phone to make a call. Originally this space was going to be dressed as a recreation area with a pool table and places to sit but it was decided that the space had such a nice reflective floor it would be better to polished it and leave the area stark.

Other alterations that were being made were the covering of the poster boards with blue felt. This was also used in the other location to help with the design and continuity. A phone was also being added.

The phone had to be fitted to the wall in such a way that it didn’t damage the bricks and could be removed. The frame had to be built to allow space behind as there was an electrical box that couldn’t be removed. It was decided that it would be  set away from the wall slightly to allow for this.

I was shown around all the other  set dressings that were going to happen that day. The corridors were to be dressed with the same flooring, wall details and general decor as the corridor back at the hospital to allow a seamless edit between both locations. In one room they were getting ready to place chairs in a circle. The chairs had to look as though they were fixed to the ground. Often with something like this, props or sets are not fixed in case they have to be moved. Instead Matt chose to fix metal braces to the chair legs to make it appear that they were fixed while allowing the director to come in and move them if needed.

Our next location stop off was an addition to an earlier episode that had been part edited. It had been decided that they needed to film more scenes so added a police conference to the story. We visited the chosen location with the location manager and set dresser with the intention of measuring up, working out where the screens would be fitted etc. With a dress like this Matt would not draw up a plan or sketch, instead he would be on site for the dress. The important part of this location visit was to get rough sizes and locations of plugs and other technical information as there would be some form of screen displaying graphics also designed by Matt’s team.

The location was part of a college building and had all the necessary components so dressing would be minimal, therefore cheaper.

As we were leaving Matt received a call about using another section of the building for an additional office scene.

This was one of the points where I really got to see how quickly the Production Designer works.

Matt and the Marshall (set dresser) got to work photographing and measuring a small class room in prep for turning it into an office, getting the dimensions of the pillars, internal window for blinds, wall lengths etc. They then discussed possibly using some of the existing furniture in some way. Lighting was also discussed. There was an internal window that led through to a wood workshop that was perfect for setting the lights. With blinds in place, it would appear to be an external window. As the filming was to be 5 days later, they had to work quickly, ringing around and ordering blinds and planning a visit to  the props house in West London. At this time the financial go ahead had not been given, Matt had calculated the dress would be around £2000. As time was against them they went ahead and planned for the dress.

Before heading to the props hire houses Matt needed to return to the office in central London briefly to discuss graphics with the team and also draw up a rough plan of the new office dress.

Back at the office I read some of the scripts and observed how Matt worked alongside the graphics team, discussing sizes of signage for the police conference and watched as he drew the plan. This was done by hand on a A4 piece of paper and then photocopied and given to Marshall.

A layout was drawn up with the walls and furniture to scale 1:50 so they had a good idea of what needed hiring.

A hand drawn plan makes sense when you are working on a set dress as it’s relatively easy to draw up anywhere. It took Matt no longer than 30 mins to do and covered all the necessary information needed. This is the nature of TV design; a quicker hands on approach that  keeps the Production designer on their toes. We had discussed the uses of software and although Matt uses CAD and Sketch Up he still does a lot by hand. What was important he said was the end result and getting the job done.

Later that day we visited the props hire stores in Acton. After visiting one and ordering some of the furniture we went to Super Hire in which every possible prop and form of furniture can be found, ranging from ultra modern back to Tudor. Super Hire spans several floors and Matt showed me around all the sections before we went to “smalls”, shelf sized props such as phones, files, glasses, kitchen ware etc. This was the section in which Matt and Marshall would find all the small props for dressing an office.

What surprised me was the attention to detail. Matt was experienced in crime drama so knew exactly where to go and what was needed. We visited pictures for wall dressing, computers, coffee machines and all manner of detail objects. The colour scheme was masculine so was kept to blues, greys and blacks. Lamps were chosen for their simple angular shapes. There were also a few personal items chosen for the personal assistant’s desk. I was asked to source all the police files that I could find that matched the three colours of the scheme plus some leather-bound files for dressing part of the filing cabinets and shelves. 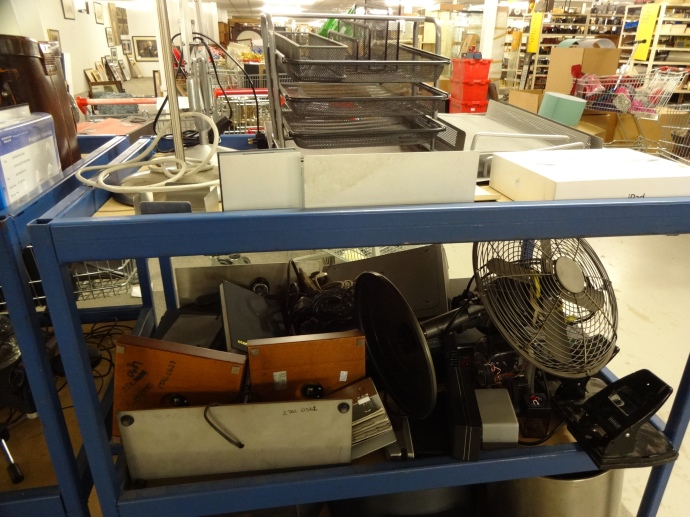 The above pictures are the baskets that we filled full of props. Once Matt got the phone call to go ahead with the set dress the props were taken to the desks and hired. They were booked in for collection just before the dress went ahead, just three days later.

After the props hire was complete day 2 came to an end.

Work shadowing gave me a good idea of what it’s like at the pre-production/production phase of TV drama. Due to a smaller art department, the Production Designer seems to be involved in so many different aspects of design and organisation. Decisions have to be made quickly and there’s no time to be precious about some design aspects. The budget and time scale only allow for so much to be done. Sometimes there’s not enough time to dress the set to really show all the finer details or character. A lot of the time there are no detailed concepts, just enough drawn up on Sketch Up or as a plan to allow the job to be completed. The bigger the budget, the more prep time there is.

Having said this, lower budget TV provides a creative challenge in comparison to film. Matt described the film as a more straight forward design project due to the fact that it’s usually designed in a block, then filmed and then the Production Designer is finished. Sometimes the designer is involved in the post production phase, more often that not they finish when filming starts. TV is different in the way that it’s an ongoing process, design backtracking where necessary, responding to script alterations and budget constraints. Pre production and production often merge together.