After working on some of the CGI background and graffiti I needed to turn my attentions to the actual set dressing that would  include rubbish, signs, a burnt out car and dirty streets in general. I designed a replacement sign for the fish bar above and changed it to the burger bar in the story. I also needed to dirty the brick work of the existing buildings, board up some of the windows with designed wooden boards. The background also included an abandoned train carriage. This was collage’d in from a photo and would be part of the CGI background. The car was also collage’d in but would be a set dress rather than CGI. 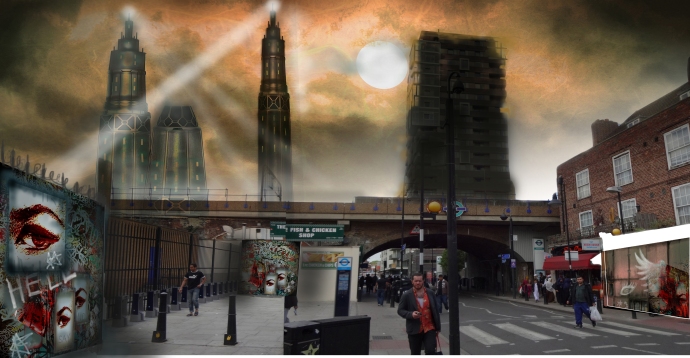 Theses pictures show the addition of set dressing components as they were added.

Below picture shows the dirtying up of the building fronts.That would be done using water-based paint so it can be removed easily. It also includes the burnt out train.

Below the image shows the addition of some fly tipping on the far right and the burnt out car. I have also added some street lights as it’s night and one or two of the buildings are inhabited. 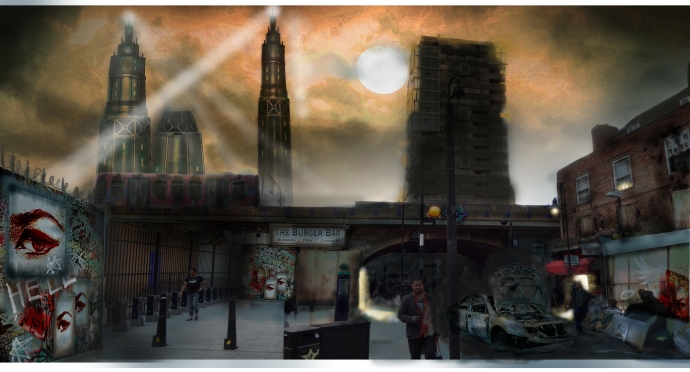 The final stages were about filling the street with bags of rubbish that hadn’t been collected, loose rubbish and papers, alteration of lighting and just generally blending and tidying the image. I also added a larger bin into the foreground and some blending of the figures so they fitted the scene. 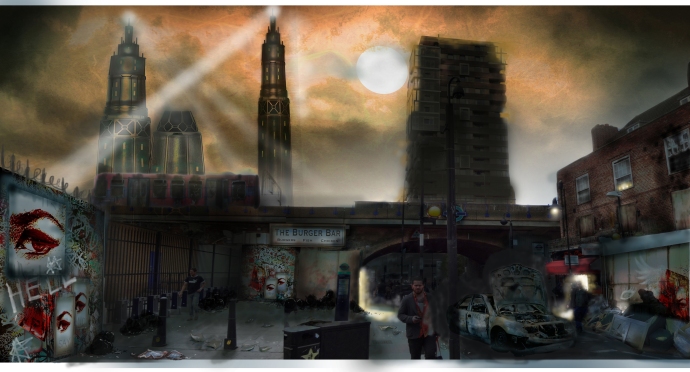 Final stage from this….

The street alteration needed to look like a dystopian society that had a more post apocalyptic feel. The city is generally uncared for, rubbish is left, people are rioting and setting fires. But the streets are still inhabited, so that meant there had to be life and places where people lived and worked. There is a burger bar, there are places in the city that will sell cigarettes, papers etc albeit limited stock. It was about creating a scene that incorporated CGI and potential post production techniques as well as traditional location scouting and set dressing.

There were some other items that could have been added such as a shopping trolley, dead flowers etc. I tried adding the shopping trolley and some more piles of rubbish and it started to look a bit too staged, after all it is a street that is still used with people running a business or a shop albeit dirty and run down.

I decided to keep the sky a murky orange green to show the fires off in the distance and the pollution. In heavily built up areas skies do take on an orange glow, this of course is emphasised for this scene.