Posted on March 10, 2014 by amandafullwoodma

This last weekend I visited London to source some potential locations that could be adapted for the story. Because the story and city are so vast it will probably take more than one trip to find everything that’s suitable and to finalise measurements and logistics of filming. I have a handful of good locations but I’m not altogether happy with the suitability until I have a go at some concept work first.

The first two locations are the tube station entrance with a small high street and a park. Whether building a shallow pond would be preferable to finding a park with a pond remains to be seen. The pond would only need to have enough water to show part submerged shopping trollies which could be cut to fit a shallow water, so to have the appearance of a deeper pond. One side could also be green screened to allow a CGI overpass in the distance. The amount of trees could cause a problem, so I will keep looking for another park that might be more suitable. The street around Shadwell is a smaller high street that potentially could be closed rather than a larger street that might prove to be more of an upheaval for local residents and shops. It could also be quieter in the Docklands area at the weekend. 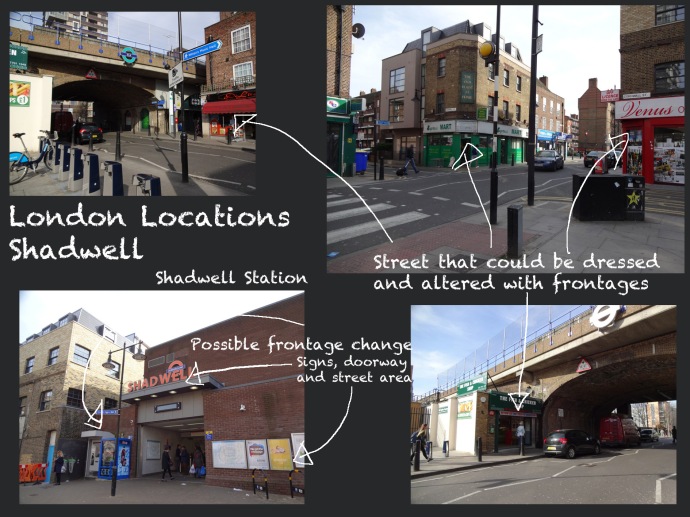 Posted on February 16, 2014 by amandafullwoodma

During the reading process I have been adding images to my Pinterest boards for inspiration. London of the future isn’t hugely different in the way that it still has Victorian and Edwardian buildings with a few modern additions. In fact The Tube Riders London shows very little in the way of development. What has been built, has been left part finished. Most of the modern parts of the city are in the east around Canary Wharf, similar to modern-day London. Future London is walled, as are all the cities of the UK. The city is a police state in which people live in fear of the looters, gangs, the government and the Huntsmen. The idea of the mood board is to start to piece together a selection of images that provide a starting point for research. 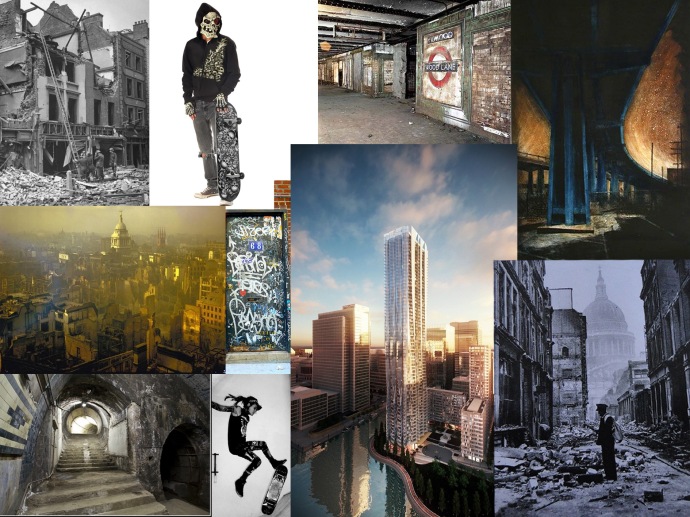 All above images are from my Pinterest boards at:-http://www.pinterest.com/amandafullwood/